Budget 2017 was unique in many ways as it changed the age-old tradition of being presented in the last week of February, and for the first time in independent India, the Railway Budget was combined with the general Budget.

Measures in the Budget 2017 have been undertaken to do justice with honest tax payers, but with the host of Expectations from Union Budget 17-18 of individuals post demonetization, Budget 2017 seems to have accomplished only a few of the raised expectations.

The Highlights of Union Budget 2017 w.r.t individuals are as follows:

Fee on the Late filing of Return:

To achieve the objective of making India a tax-compliant society, Budget 2017 seeks to impose the fee on the delayed filing of returns to be applicable from AY 2018-19.

Reduction in tax rates is a long pending demand and focus also needs to be on reducing the complexity of direct tax laws. The Union Budget has well addressed this issue and rationalization of tax rates has been made to incentivize the tax payer for widening the tax base of the country. 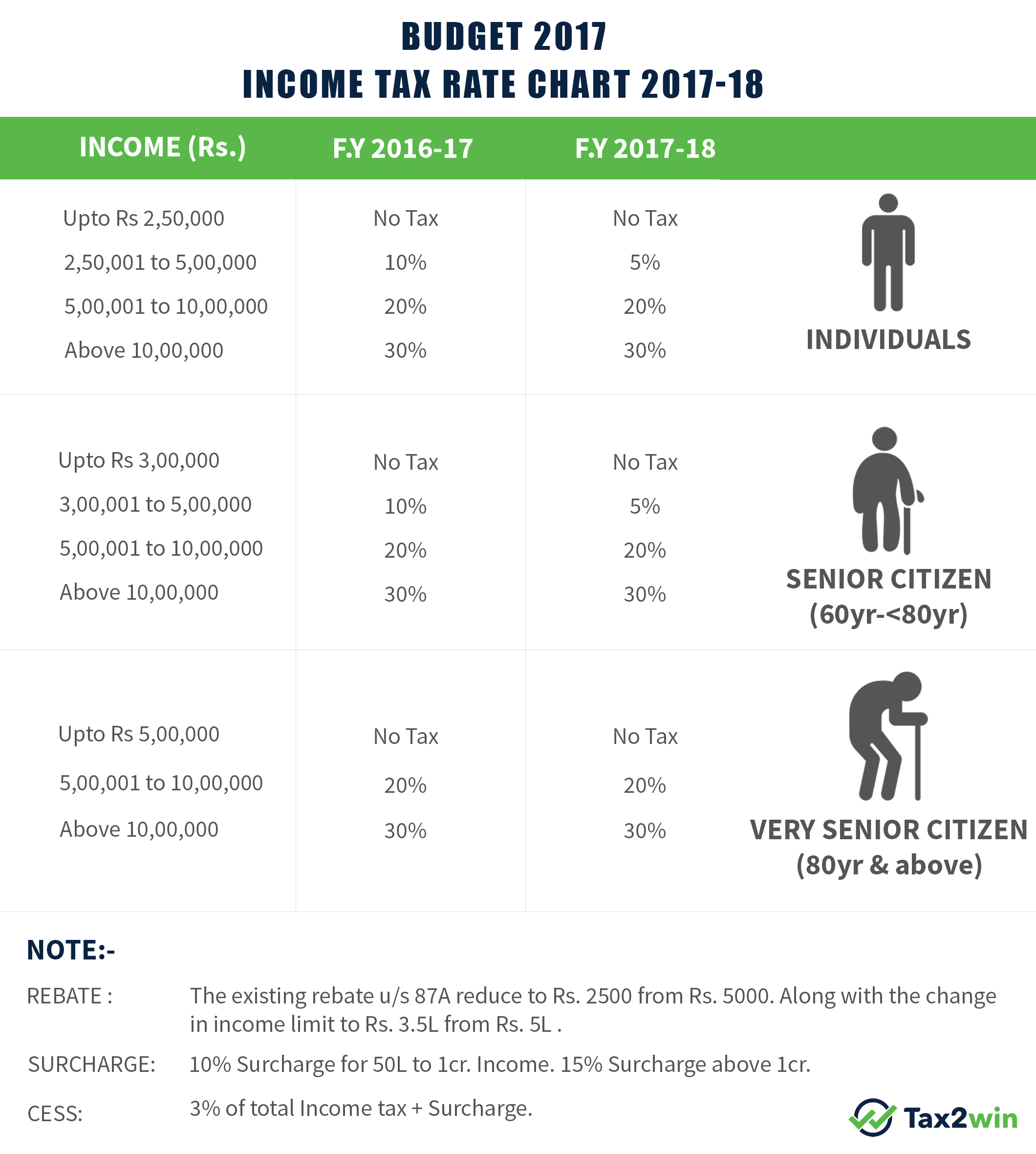 Surcharge of 10% on Affluent:

In order to fill the gap of revenue loss due to the reduction in tax rates, an additional burden of the surcharge of 10% on individuals having taxable income from Rs.50lakhs to Rs.1crore is imposed. At a post-Budget Interaction with the Industry chambers, FM justified the levy of the additional surcharge, saying that  “In a largely non-tax compliant society, the state needs resources and the resources will have to come from the more affluent as far as the tax structure is concerned. ” The 15% surcharge on individual taxpayers with taxable income exceeding Rs.1crore remains in force.

To ensure tax compliance in India and for easing the process of filling income tax return, a simple one-page ITR form is to be introduced by the Government for individuals with taxable income (excluding business income)up to Rs.5Lakhs.

The Union Budget 2017 Impact on Individual taxpayers is demonstrated below: 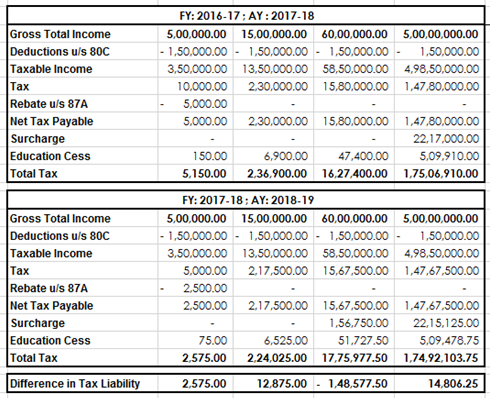 You can assess the impact of Budget announcements on your Income with our “Budget Impact Calculator”.

The current provision allows a tax payer to take the benefit of claiming entire interest paid on home loans for property other than self-occupied as the deduction in the same year to the extent of income available under all the heads of Income and the remaining loss if any, was allowed to be carried forward for 8 AY.

There was no upper limit on setting off of losses in an AY, thereby saving money on taxes.

However, the scenario has been changed with the advent of Budget 2017-18. Now the losses under House Property can be set off against other heads of Income only to the extent of Rs.2Lakh in a year. The balance loss shall be carried forward for 8 AY. This may increase your outgo on taxes.

On Commission: Budget 2017-18 seeks to reduce compliance burden in the case of Individual insurance agents with nil tax liability. The Budget seeks to exempt TDS of 5% being charged on commission paid to individual insurance agents; on his furnishing of a self-declaration in Form 15G/15H declaring that the tax on his estimated total income for the year shall be Nil to the deductor.

To demotivate cash transactions in the economy, the govt. seeks to disallow any cash payments made exceeding Rs.10,000 (previously Rs.20,000) to a person in a single day, while computing profits from the business of the taxpayer.

Presently, the rate of deemed profits for businesses availing the benefit of Sec 44AD (presumptive income section) is 8% of total turnover, irrespective of whether received through cash or non-cash medium. With the aim of promoting digital transactions and encouraging acceptance of digital payments, govt seeks to incentivize these small businesses availing the benefit of presumptive taxation.

Maintenance of Books of Accounts:

Earlier sec 44AA of the Act provided for maintenance of books of accounts and documents only by those persons who are carrying on business and profession (other than the specified profession of medical, legal, etc.) and whose income exceeds Rs.1,20,000 or whose turnover exceeds Rs.10,00,000 in the previous year.

Since, the threshold limit for applicability of presumptive taxation u/s 44AD was increased to two crores rupees by Finance Act 2016 a similar amendment is required in sec 44AB of the Act. In simple words, the threshold limit for the tax audit under Section 44AB was not increased to Rs. 2Crores for the taxpayers opting for the presumptive scheme u/s 44AD.

Therefore, the person declaring profits for the year under presumptive taxation scheme u/s 44AD is not required to get his books of accounts audited.

The limit of cash donations to charitable institutions under Section 80G is now restricted to Rs.2,000 from the earlier available Rs.10,000.

Currently, an individual either an employee or a self-employed can contribute and claim benefits under the Act.

Budget 2017-18 seeks to rationalize the existing provisions of the scheme by introducing two major amendments.

Firstly, in order to bring parity between an employee and a self-employed, the contribution up to 20% of gross total income will be allowed as the deduction to the self-employed individual as well.

Secondly, relief is further granted to employee subscribers of NPS by exempting partial withdrawal up to 25% of his own contribution to the fund (not employer’s contribution) from tax.

Professionals with receipts up to Rs.50Lakhs p.a. eligible for the presumptive taxation scheme can pay advance tax in one installment instead of four on or before the 15th March of the F.Y.

The time period for revising a return filed within the prescribed time is being reduced to 12 months from completion of respective FY as against the time period of 24 months provided earlier.