Filed your return before the due date but forgot to verify before the expiry of time limit? Then in such case, your ITR has become an invalid ITR and now you would have to file the ITR again. Surprised? Yes, you heard it right. Now, you need to file your ITR as a belated return. Don’t know why? Let’s get the insight into the matter :

What is Verification of ITR?

What is the Time limit to Verify your ITR?

The time limit for verification is 120 days from the date of filing the return. Let’s say you have filed the ITR on the due date i.e. 31st July then the last date to verify your ITR would be 28th November. Further, if we talk particularly for ITR of F.Y. 17-18, when the due date was extended to 31st August then the last date for verification would be 29th December 2018.

What if Verification is not done?

If the ITR is not timely verified then such return becomes invalid be it original or revised. So, all the hard work done to file your return in time goes in vain. It is considered as if you never filed the return for that year. Therefore, along with the timely filing of ITR timely verification is also necessary.

However, in some genuine cases where you could not verify your ITR on time, a condonation delay request can be filed on the income tax e-filing website. This to avoid genuine hardship faced by the assessee.

Recently, the income tax department has launched a watermark facility on the invalid ITR V. Earlier, there was no such watermark. Now, the Invalid ITR V will always have a watermark stating “Invalid” on it. Below are the specimens of Invalid ITR V earlier and now : 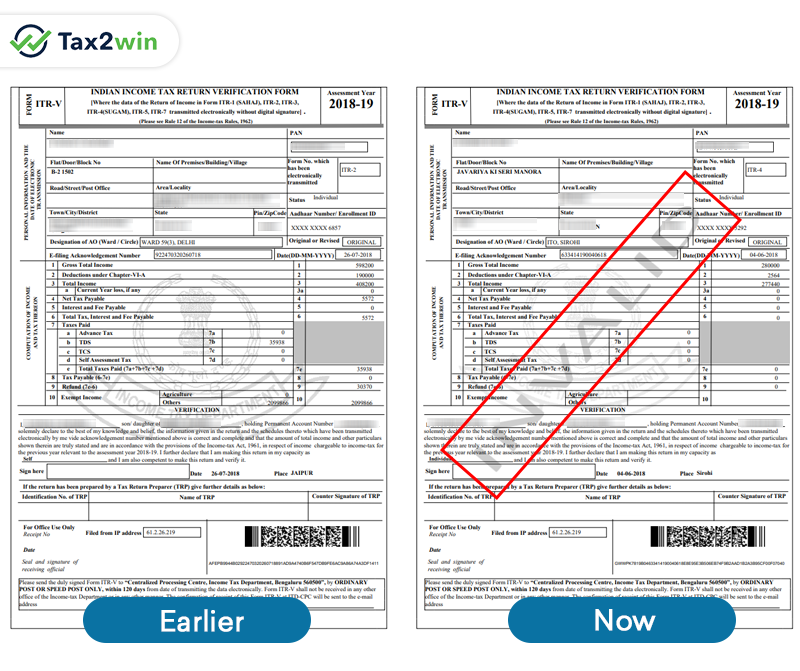 What are the Repercussions of Invalid ITR?

You may face the effects of an Invalid ITR at various places. Some of them are as follows :

Further, point to be noted here is that from the ITR of F.Y. 17-18, even if the ITR is filed before the due date but not e-verified within the time limit then the ITR shall become invalid. Consequently, fees u/s 234F shall be levied for that ITR. So, be aware and don’t fall prey to Sec 234F even after filing your ITR on time.

Verifying your return is equally important as filing your return. If the time limit to verify your ITR expires then the ITR filed would become Invalid and it will mean as if you have never filed it. So, you need to pay attention to this step as well.

To know about ITR Forms in details, click here.